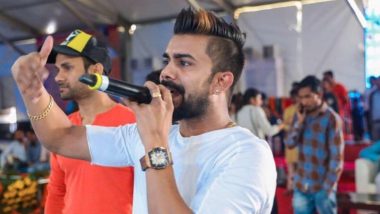 Mr Ashish Mathur is a big name when it comes to dance and choreography. He is the founder and owner of the dance institute called Aasma Dance Company, which he formed in 2006. He started working there as a Choreographer and is still a part of the same. In his tenure of last 15 years, he has worked with top Bollywood and Music celebrities as a choreographer. These include Mikka Singh, Jasbir Sassi, Gagan Kokri, and Dev Kumar Deva to name a few. Besides being the part of several musical videos and similar ventures, he has travelled a lot with his team for the live performances and concerts.

He travelled with his team to more than 20 nations and few in Europe and other places in the world representing the country. He even performed in different international film festivals with Bollywood stars like Sonakshi Sinha, Salman Khan, Sohail Khan, Arbaz Khan, Vidya Balan, Anil Kapoor, Neha Dupia and Prachi Desai to name a few. He performed in the Norway Film Festival dancing on film Dabang song with Salman Khan and Sonakshi Sinna. In 2016, he embarked with his unique idea of bride groom entry with 80 artists at the venue called ‘The Umrao’. It was an instant hit and soon turned a trend in North India for Big bride groom entries.

Apart from his dance academy, he also has founded National Artist Welfare Association (NAWA) with Mr Ashish Mathur. He participates with his team for the welfare of different social ventures supported by corporates. Under his dance academy he and his team has performed in more than 7000 shows with an average of 500 shows every year. In 2019, he came out with a cricket tournament for industry people called AECL (Artist Event Cricket League).

Why Is Dancing So Good for Your Brain?Ashish Mathur sets new standards in choreography to achieve ultimate goals

This website uses cookies to improve your experience while you navigate through the website. Out of these cookies, the cookies that are categorized as necessary are stored on your browser as they are essential for the working of basic functionalities of the website. We also use third-party cookies that help us analyze and understand how you use this website. These cookies will be stored in your browser only with your consent. You also have the option to opt-out of these cookies. But opting out of some of these cookies may have an effect on your browsing experience.
Necessary Always Enabled
Necessary cookies are absolutely essential for the website to function properly. This category only includes cookies that ensures basic functionalities and security features of the website. These cookies do not store any personal information.
Non-necessary
Any cookies that may not be particularly necessary for the website to function and is used specifically to collect user personal data via analytics, ads, other embedded contents are termed as non-necessary cookies. It is mandatory to procure user consent prior to running these cookies on your website.
SAVE & ACCEPT